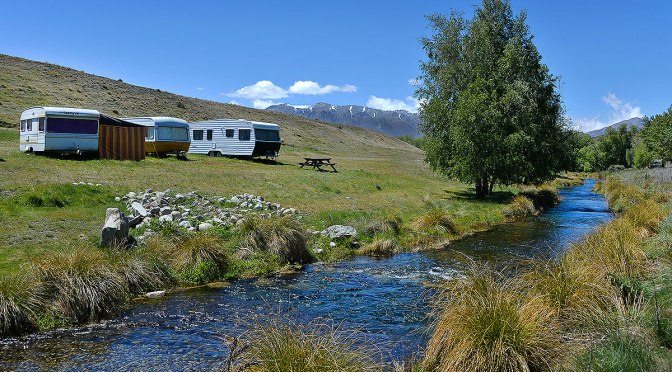 We woke up to another stunning day at Tekapo NZMCA park by the lake. Ray and Margaret next door in their bus were up and about. Fiona had an idea that she’d like to take Rafe out and check out some of the lakes nearby.

As soon as I stepped out to see Ray, they were doing exactly that and did we want to come with them in their Toad (Suzuki). Then came the rustling around for thermos flasks and cooly bags. A better idea said I, why don’t we take Rafe and we’ll have fridge and cup of tea / butter etc facilities. We were off.

Ray and Margaret have been on the road in their bus for 4 ½ years so there aren’t many places in the South Island that they don’t know about. One of their little Gems was a neat place called McGregor Lake and Lake Alexandrina.

Its about 12k’s from Tekapo and is run as a campsite by a Community Committee. It is in a fantastic spot on the side of a river between the two lakes. Just spectacular.

You can stay their for $10 a night per person. There are Toilets and Showers and rubbish along with an outdoor kitchen.

Our first stop was the Dump Station at Tekapo to fill and empty and then the local 4 Square shop for some fresh bits for lunch, then we were off.

We headed along the road to Mt St John and then a short gravel road and we were there.

We met a chap who had been there a while in his caravan and was keenly following the antics of the local Paradise Ducks. He directed us further down a track to the other area where there more than 50 Caravans and a whole bunch of Baches up on the hill.

As we walked along the river, Ray told us about a time when he was here earlier when he saw Salmon swimming upstream to spawn. The small river was just chocker with Salmon. It would have been quite sight !

With the caravans on both sides of the river, its just an idylic spot to stay. No shops and no pubs but if you’ve got a kayak or just want to blob, what a sensational spot.

After a good look around, we retired to Rafe for lunch with cups of tea and plenty of laughs.

The images say it all.
Click on the Gallery below for a Slideshow

A bridge across the river

Baches on the hill 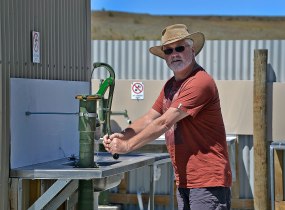 Ray checking out one of the pumps 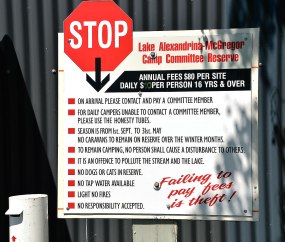 Rules of the road

Margaret, Ray and Fiona walking back for lunch 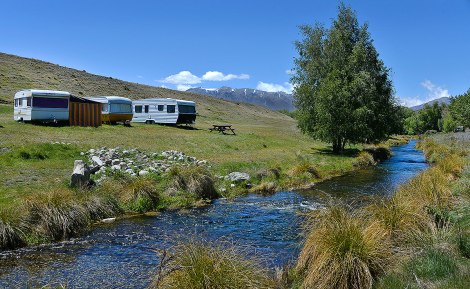 After lunch we tidied up and headed back to Tekapo Club camp and organised ourselves for the next event of the day, Happy Hour!

As the afternoon wore on, more and more neighbouring Motorhomers and Caravanners came over to join us. Its really interesting meeting people from all walks of life and where they come from. Lots are retired but many still work and its interesting hearing their stories.

Another fantastic day in the Sunny South Island. 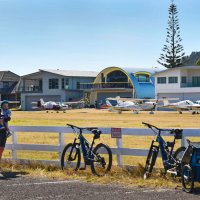