We got a rental while we were in Prague so we could leave the motorhomes at the campsite and have a look around. One of the planned outings if you like, was to Cesky Kumlov which is 150k’s southwest of Prague.

Click on the Images for Hi res or a Slideshow

It is now a UNESCO protected World Heritage site.

We set off about 9am and after a stop or two along the way, we arrived at Cesky Kumlov. The town was established in the 1400’s and was then German. Most of the buildings in the town were built in the 1500’s due to a discovery of Gold by the castle.

Tourists enjoying the boats on the river

Fiona and Dianne on the bridge watching people boating in the river.

The river. The restaurant on the right where we had lunch.

Part of the Castle 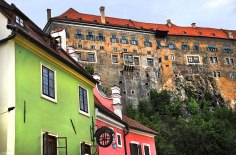 The Castle hovering over the village

The town is built on what is almost an island by the course of the fast flowing river that almost completely surrounds it. The castle was closed on the day we were there as it was Monday. I’m not quite sure how that works but never mind.

There were a few bus load of tourists there but nothing like other places we’ve been to. We had a great meal in a restaurant by the river and walked around the village.

A stunning wee town and if it wasn’t for the local knowledge of Gary and Dianne, we would never have known about it.  A great day out. Thanks guys.

7 thoughts on “One the Czech Republics Hidden Gems” 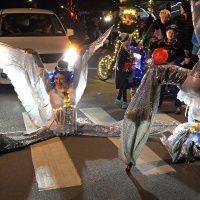