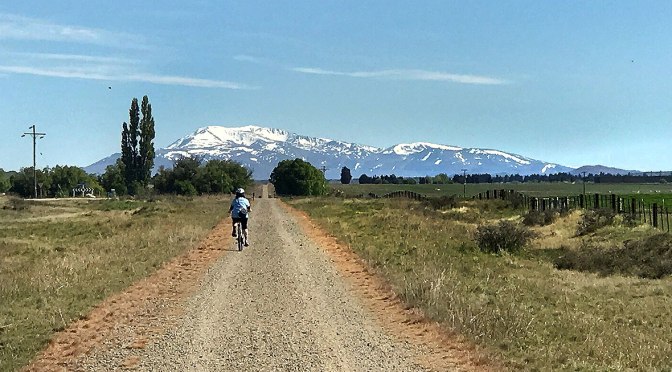 We were staying at the NZMCA park at Ranfurly which is huge and virtually right in the middle of town. There is a dump station right next door along with recycling.

On our first night there, we met up again with David and Therese from Papamoa who we bumped into while we were looking at Ophir. It was nice to see them again.

The next day saw an excellent day for weather, little wind, about 25C and we were ready to go. My old mate Gary who used to live here for a few years with his wife Chris, had recommended that we head up to Wedderburn as its only 9k’s and although its a slight uphil run all the way, we would love coming back after a beer at the Wedderburn pub 🙂

Sounded like a great idea to me! Gary and Chris moved down here a few years ago and setup a B&B just on the outskirts of the town but have now moved to the warmer climes of Ruakaka to be closer to their adult children.

We left the Ranfurly Railway Station right on 10am and off we went. It was really easy riding for most of the way. The only impediment in some parts was watching places where there was extra gravel that could slip under the wheels but the surface generally was easy.

One of the stops looking back towards Ranfurly 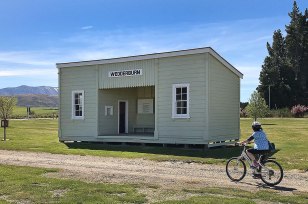 Nearly there. The St Bathans mountains

On the way back. Time to stop and check out those mountains again 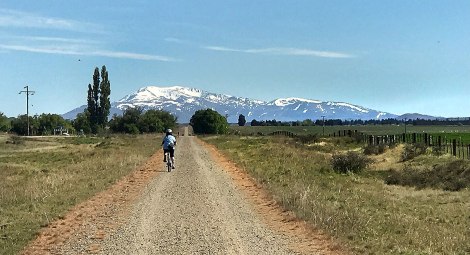 The St Bathans mountains in the distance

There are a couple of huts along the way for a breather along with historical information. One has a loo slightly off in the trees but its there !

I didn’t look at the watch when we arrived but it was lunchtime so after some water and a cup of coffee in the pub, we had lunch which was fantastic.

I think her name was Sheryl (not sure) but she and her husband are selling after running the pub for 17 years ! They are moving to a new lifestyle place North of Auckland so that’s a big change for them. They have done a great job with their Wedderburn Tavern. It looks fantastic.

We set off on our bikes and with minimal pedalling, were back in Ranfurly in time to tidy up and to meet up with David and Therese for a drink at the end of the day. Its great riding and Gary hit the nail on the head for a ride from Ranfurly. Its a lot of fun and even for someone like me. We both found it easy on an ordinary bike.(Not electric!) 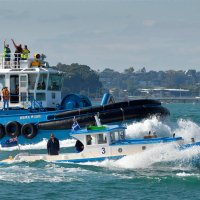